Director
Lee Daniels
Duration
110’
Writer
Geoffrey Fletcher, Sapphire
Casting
Gabourey Sidibe, Mo'Nique, Paula Patton
In New York City's Harlem circa 1987, an overweight, abused, illiterate teen who is pregnant with her second child is invited to enroll in an alternative school in hopes that her life can head in a new direction.

10
Score: 69% Best Streak: 5
Precious: Based on the novel ‘Push’ by Sapphire is one of the most popular, shockingly mesmerizing, and very best movies of 2009 as well as one of the most depressing movies in the history of Hollywood and one of the greatest movies ever made in the 2000’s decade! It’s a powerful triumph that really captures heart and soul to one’s struggle in youth and is hanging on for dear life!! Widespread critical acclaim go to the direction, screenplay, cinematography, themes, messages, and the acting!! 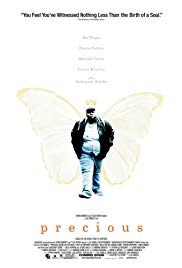