10
Score: 85% Best Streak: 5
Black Orpheus is one of the most popular, excruciatingly depressing, and very best movies of 1959 as well as one of the greatest foreign language movies of all-time representing either Brazil or France and one of the greatest movies ever made in the 1950’s decade! A powerful experience that really explores the downsides of true love’s tragedy & the consequences behind the obstacles. Widespread critical acclaim go to the direction, screenplay, themes, concept, and all of the cast’s performances!! 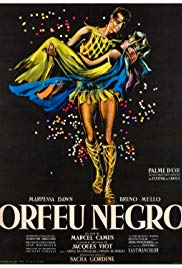