Director
Pietro Germi
Duration
105’
Writer
Alfredo Giannetti, Ennio De Concini
Casting
Marcello Mastroianni, Daniela Rocca, Stefania Sandrelli
A married Sicilian baron falls in love with his cousin and vows to wed her, but with divorce illegal he must concoct a crime of passion to do away with his wife.

10
Score: 71% Best Streak: 5
Divorce Italian Style is one of the most popular, unbelievably entertaining, and very best movies of 1961 as well as one of the greatest foreign language movies set in the country of Italy and one of the greatest movies ever made in the 1960’s decade! It’s a two thumbs up to this comedic black comedy seeing how the characterization and concept both set an unusual tone to the story, everything is more interesting! Widespread critical acclaim go to the direction, screenplay, humor, and the acting! 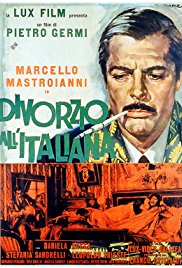