Director
Martin Ritt
Duration
111’
Writer
Irving Ravetch, Harriet Frank Jr.
Casting
Paul Newman, Fredric March, Richard Boone
John Russell, disdained by his "respectable" fellow stagecoach passengers because he was raised by Indians, becomes their only hope for survival when they are set upon by outlaws.

10
Score: 80% Best Streak: 3
Hombre is one of the most popular, excitingly gun-slinging, and very best movies of 1967 as well as one of the greatest western movies in the history of Hollywood cinema and one of the greatest movies ever made in the 1960’s decade! It’s a wild ride to the west as the revisioned tone to a western well done creates a story so questionable and knowledgeable, you won’t know what hit you! Widespread critical acclaim go to the direction, screenplay, revisioned tone, setting, and the performances!! 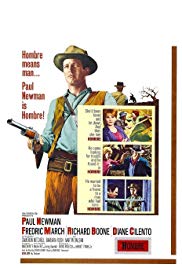