10
Score: 71% Best Streak: 3
The Crying Game is one of the most popular, unfathomably balanced with excellence, and very best movies of 1992. Not only protecting the idea of love and going through reformation, the movie stands as one of the greatest works done by Neil Jordan and one of the greatest movies ever made in the 1990’s decade! A thoughtful thriller that brings the explorations of the themes to greater meaning. Widespread critical acclaim go to the direction, screenplay, editing, themes, and the cast performances!! 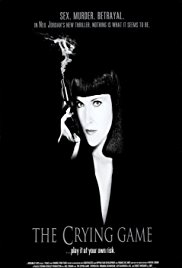