10
Score: 83% Best Streak: 3
A Man for All Seasons is one of the most popular, culturally significant, & very best movies of 1966 as well as one of the greatest biographical period movies of all-time & one of the greatest movies ever made in the 1960’s decade! A powerful triumph that really explores the themes of power & loyalty as the lead brings truthful change of rebellion in refusal! Widespread critical acclaim goes to the direction, screenplay, historical accuracy, costumes, production, cinematography, and the acting!! 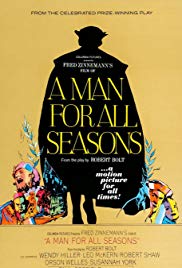