10
Score: 62% Best Streak: 4
The Lives of Others is one of the most popular, culturally significant, and very best movies of 2006 as well as one of the greatest foreign language movies of all-time and one of the greatest movies ever made in the 2000’s decade! A triumphant and intense classic that captures truthful themes and explored personal beliefs that brings influence and believable behavior! Widespread critical acclaim goes out to the direction, screenplay, cinematography, setting, themes, and the cast’s performances!! 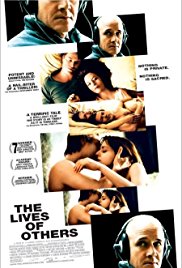