10
Score: 83% Best Streak: 3
The Sting is one of the most popular, cleverly entertaining, and very best movies of 1973 as well as one of the greatest crime caper stories in the history of cinema and one of the greatest movies ever made in the 1970’s decade! An entertaining style to a new essence of filmmaking that really analyzes the explorational themes of thievery and trickery to higher grounds and bigger stakes! Widespread critical acclaim go to the direction, screenplay, themes, plot twists, and the cast performances!!! 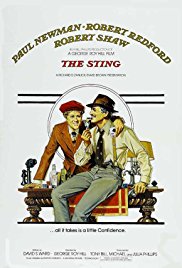