Director
Fritz Lang
Duration
153’
Writer
Thea Von Harbou, Thea Von Harbou
Casting
Brigitte Helm, Alfred Abel, Gustav Fröhlich
In a futuristic city sharply divided between the working class and the city planners, the son of the city's mastermind falls in love with a working class prophet who predicts the coming of a savior to mediate their differences.

10
Score: 54% Best Streak: 3
This classic German expressionist film is a masterwork by Fritz Lang that ever after 90 years is still a technical marvel.

10
Score: 58% Best Streak: 2
Metropolis is one of the most popular and very best movies of 1927 as well as one of the greatest movies ever made in the 1920’s decade and one of the best movies giving the full and detailed insight emphasizing on German Expressionism! It’s a very adventurous and futuristic black and whiter that raises the bar in the roots of Sci-Fi & Fantasy and never a dull moment! Widespread critical acclaim go out to the direction, screenplay, cinematography, visual effects, lighting, and the performances! 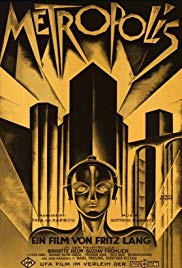