10
Score: 83% Best Streak: 5
All About Eve is one of the most popular, elegantly influential, and very best movies of 1950 as well as one of the greatest Best Picture winners in Academy Award history and one of the greatest movies ever made in the 1950’s decade! It’s a Hollywood classic that brings the laughs and conspiracy to the characters both inside and outside! Also a very relevant story that society deals with. Widespread critical acclaim go out to the direction, screenplay, hair/make-up, tone, and the performances!! 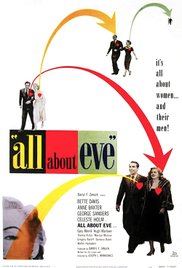