10
Score: 91% Best Streak: 7
Ikiru is one of the most popular and very best movies of 1952 as well as one of the greatest foreign language movies of all-time and one of the greatest movies ever made in the 1950’s decade! It’s a love letter to helping people change from cole heart to warm heart through the higher developments of the main character! A powerful drama that sets the bar for good foreign language cinema! Widespread critical acclaim go out to the direction, themes, screenplay, characterization, and the acting!! 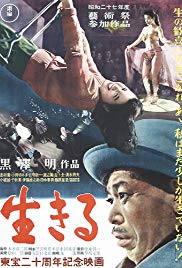