10
Score: 87% Best Streak: 9
Incedies is one of the most popular, culturally & aesthetically significant in the future of foreign language, and very best movies of 2010! Besides testing the quota of religion and taking the subject matter to rigger levels, the movie stands as one of the greatest foreign language movies of all-time and one of the greatest movies ever made in the 2010’s decade! Widespread critical acclaim go to the direction, screenplay, themes, subject matter, editing, sound, makeup, and the performances!!!! 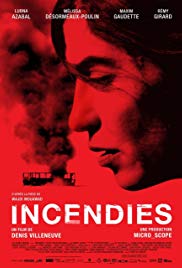