Director
David Lean
Duration
161’
Writer
Pierre Boulle, Carl Foreman
Casting
William Holden, Alec Guinness, Jack Hawkins
After settling his differences with a Japanese P.O.W. camp commander, a British Colonel co-operates to oversee his men's construction of a railway bridge for their captors, while oblivious to a plan by the Allies to destroy it.

10
Score: 100% Best Streak: 6
The Bridge on the River Kwai is one of the most popular, amazingly intenseful, and very best movies of 1957 as well as one of the greatest World War II set movies of all-time and one of the greatest movies ever made in the 1950’s decade! It’s rio-roaring fun with an emphasis on both intense and remarkable, successfully exploring themes like POWs and the behavior of POWs! Widespread critical acclaim go out to the direction, screenplay, action, cinematography, accuracy, and the cast performances!! 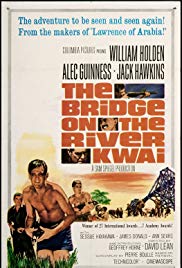