Director
Hayao Miyazaki
Duration
125’
Writer
Hayao Miyazaki
Casting
Anna Paquin, James Van Der Beek, Cloris Leachman
A young boy stumbles into a mysterious girl who floats down from the sky. The girl, Sheeta, was chased by pirates, army and government secret agents. In saving her life, they begin a high flying adventure that goes through all sorts of flying machines, ev

10
Score: 73% Best Streak: 6
Castle in the Sky is one of the most popular, visually stunning, culturally & aesthetically significant, and very best movies of 1986 and to ever inspire foreign language filmmaking representing the country Japan from the East! Not only it’s one of the greatest foreign language movies of all-time, it’s also one of the greatest animated movies ever made in Hollywood! Widespread critical acclaim go out to the direction, screenplay, animation, themes, symbols, music, and the voice performances!!!!! 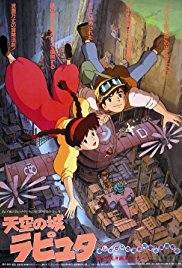