Director
Richard Eyre
Duration
92’
Writer
Patrick Marber, Zoe Heller
Casting
Cate Blanchett, Judi Dench, Andrew SImpson
A veteran high school teacher befriends a younger art teacher, who is having an affair with one of her 15-year-old students. However, her intentions with this new "friend" also go well beyond platonic friendship.

10
Score: 75% Best Streak: 3
Notes on a Scandal is one of the most popular & very best movies of 2006 as well as one of the greatest movies ever made in the 2000’s decade! An intense triumph that spins out of control towards unthinkable objectives and life-changing obstacles that further develops the two main leads to absolute highs! A different kind of take to Fatal Attraction with a brilliantly dark tone! Widespread critical acclaim go to the direction, screenplay, and the performances (particularly Blanchett and Dench)!! 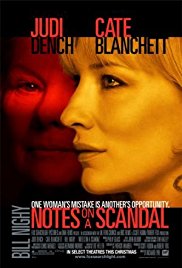