10
Score: 86% Best Streak: 5
Twelve O’Clock High is one of the most popular, hugely explosive, and very best movies of 1949 as well as one of the greatest World War II movies of all-time and one of the greatest movies ever made in the 1940’s decade! The US Army Air Forces are believable to their word and what to achieve! These guys we call heroes are flying higher than ever and more height yardage! Widespread critical acclaim go out to the direction, screenplay, action, cinematography, themes, and the cast’s performances!! 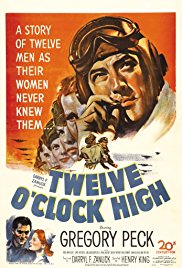