Director
Garth Jennings
Duration
108’
Writer
Garth Jennings
Casting
Matthew McConaughey, Reese Witherspoon, Seth McFarlane
In a city of humanoid animals, a hustling theater impresario's attempt to save his theater with a singing competition becomes grander than he anticipates even as its finalists find that their lives will never be the same.

10
Score: 95% Best Streak: 11
Sing is one of the most popular, musically hilarious, wonderfully entertaining, and very best movies of 2016! It’s still standing as one of the greatest animated movies ever made in the 2010’s decade! It’s an amazing pop show that brings back the life the importance of musical competition with only the greatest music hits ever written and recorded in the history of music! Widespread critical acclaim go to the direction, screenplay, soundtrack, fun tone, animation, and the voice performances!!!!!

JUMPS OFF THE SCREEN! 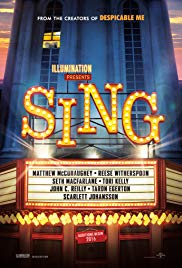