Director
Norman Jewison
Duration
102’
Writer
John Patrick Shanley
Casting
Cher, Nicolas Cage, Danny Aiello
Loretta Castorini, a bookkeeper from Brooklyn, New York, finds herself in a difficult situation when she falls for the brother of the man she has agreed to marry.

10
Score: 83% Best Streak: 5
Moonstruck is one of the most popular, excitingly entertaining, and very best movies of 1987. Besides getting the man and imploding all the secrets and honesty, the film stands as one of the greatest performances in Cher’s career and one of the greatest movies ever made in the 1980’s decade! A love story done well and efficient with emotion, heart, soul, and understanding. Widespread critical acclaim go to the direction, screenplay, concept, soundtrack, dialogue, and the cast’s performances!!! 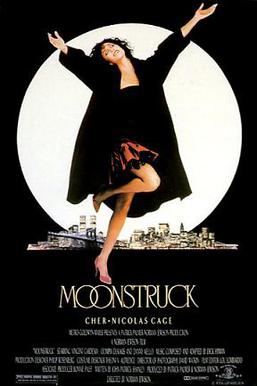