Director
Henri-Georges Clouzot
Duration
117’
Writer
Pierre Boileau, Thomas Narcejac
Casting
Simone Signoret, Véra Clouzot, Paul Meurisse
The wife and mistress of a sadistic boarding school headmaster plot to kill him. They drown him in the bathtub and dump the body in the school's filthy swimming pool... but when the pool is drained, the body has disappeared

10
Score: 88% Best Streak: 6
Les Diaboliques (Diabolique) is one of the most popular, suspiciously surprising, and very best movies of 1955 as well as one of the greatest foreign language movies of all-time and one of the greatest movies ever made in the 1950’s decade! It’s a very dark story that really originates the subtext and context with who’s after who and creating something original and challenging! Widespread critical acclaim go out to the direction, screenplay, tone, themes, characterization, and the performances!!

A WORK OF ART! 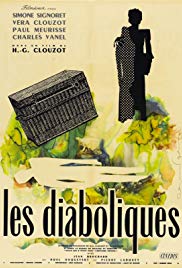