Director
George Miller
Duration
108’
Writer
George Miller, John Collee
Casting
Elijah Wood, Brittany Murphy, Hugh Jackman
Into the world of the Emperor Penguins, who find their soul mates through song, a penguin is born who cannot sing. But he can tap dance something fierce!

10
Score: 100% Best Streak: 6
Happy Feet is one of the most popular, ridiculously cartoonish, and very best movies of 2006 as well as one of the greatest animated movies ever made in the 2000’s decade! It’s a fun mood for all the families looking to dance rather than just sing! It’s a dazzling winter wonderland that has a storyline so meaningful, it carries a true message about ourselves! Widespread and critical acclaim goes out to the direction, screenplay, animation, themes, musical numbers, and the voice performances!! 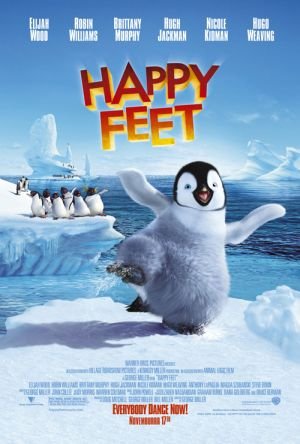