10
Score: 63% Best Streak: 6
Amores Perros is one of the most popular, crucially violent, culturally & aesthetically significant, and very best movies of 2000! A very gruesome way to kick-off the 2000’s decade is with perhaps one of the greatest foreign language movies ever made representing Mexico! It’s one of the greatest movies made in the 2000’s decade! A bloody triumph! Widespread critical acclaim go to the direction, screenplay, visual style, themes, messages, cinematography, editing, and the cast’s performances!!!!! 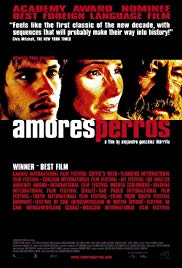